Winner: ‘WeCo’ – at the leading edge of Vested partnership, Johnson & Johnson together with Sodexo 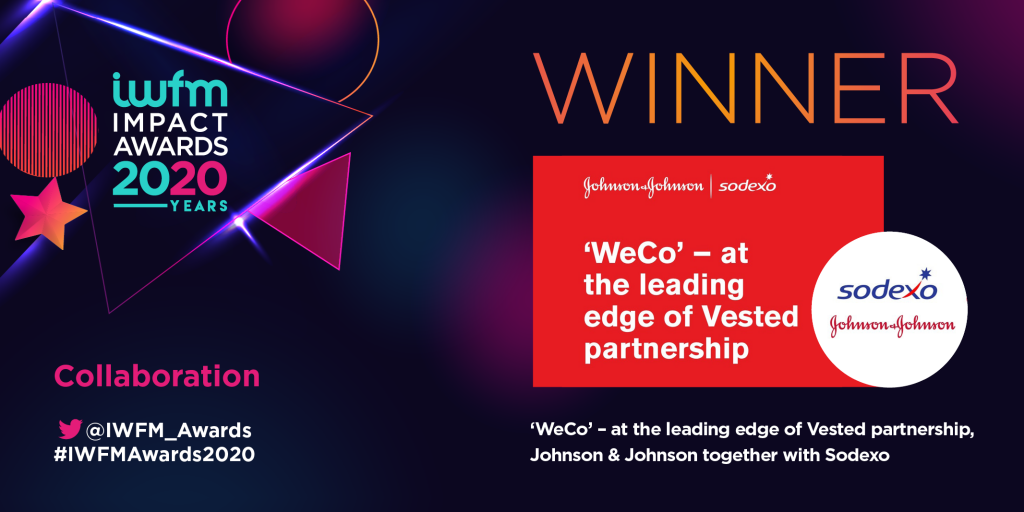 Sodexo’s relationship with Johnson & Johnson (J&J) has lasted for nearly 25 years. In 2013, Sodexo was awarded a contract for FM services across 10 EMEA countries.

However, the contract model was founded on traditional sourcing behaviours. The goal was to deliver continuous savings year on year, without either party being vested in each other’s success. While there were some pockets of success, there were significant challenges with this model and collaboration was at its lowest.

Together, Sodexo and J&J developed a new working partnership, using Vested Outsourcing™, a hybrid outsourcing business model whereby both parties focus on shared values and goals to create an arrangement that is mutually beneficial. Effectively J&J pays only for the operation’s results, while Sodexo is paid for the value its services provide, rather than for individual activities undertaken.

The new Vested contract created a new virtual joint J&J and Sodexo organisation (called the ‘WeCo’). The joint organisation resulted in J&J’s Engineering and Property Services team and Sodexo’s facilities team together designing a joint vision and scope for its collaborative work over the following five years.

Both parties defined the scope of the Vested model through a series of foundation rules of engagement, and ultimately supporting both organisations’ founding principles. These rules included a focus on outcomes, not transactions; a focus on that ‘what’ not the ‘how’, and an agreement on clearly-defined and measurable outcomes.

J&J’s head of FM was also appointed partnership strategic director at Sodexo, offering perspectives and transparency for both organisations, for the initial 12 months.

The WeCo created an initial eight-figure value of savings for J&J. Through continued collaboration, the initiative exceeded this original savings target.

Ernst and Young (EY) was asked to complete Compatibility and Trust (CaT) assessment to review the results of the Vested partnership. Through employee surveys, individuals were asked to score both themselves and their counterpart. The scores rose from 0.64 prior to the partnership, to 0.78.

J&J was able to consolidate its supply chain and budgetary control across its EMEA sites. Through this consolidation, each site receives a standardised service and workplace experience.

For Sodexo, the model guarantees a specific return, and J&J it ensures cost certainty.

The Vested Model was implemented through:

J&J and Sodexo operational teams underwent a vested training programme to ensure the new model’s outcome-based approach was understood by teams on the ground.