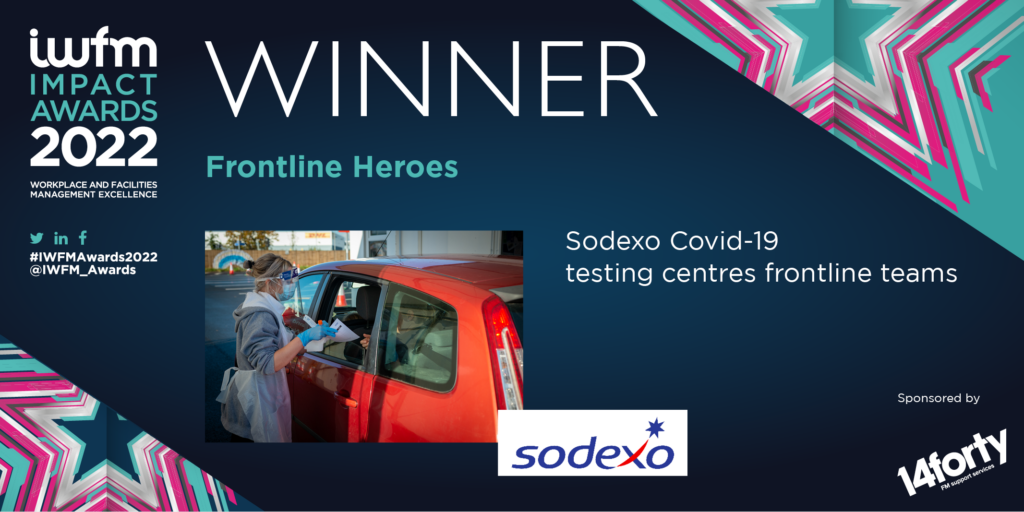 Sodexo – the largest provider of COVID-19 testing centres and mobile testing units in the UK prior to the end of free testing – has won the Frontline Heroes Award for the impact it has had on its social environment.

Sodexo’s frontline heroes played a vital role in helping to reduce the spread of COVID-19 infections; its frontline heroes at testing centres across the UK demonstrated extraordinary service excellence and social value. Surveys taken by the UK Health Security Agency (UKHSA) showed the team’s average customer satisfaction rating across all its designated sites across England, Wales and Scotland for the duration scored 88%.

Test units were also set up on-site at some internationally high-profile events, from the Goodwood Festival of Speed, the United Nations COP26 Conference and the G7 Summit in Cornwall.

Management of these sites required dedication from team members who also displayed innovation, coming up with ideas about how to improve service on-site. For example, Kayley Davies, who worked at a local test site in Bolton, suggested two solutions to help people who are profoundly deaf to use the test sites.

The team showed innovation with colleagues coming up with fundraising ideas to support local communities. For example:

Many of Sodexo’s people worked during the peaks of the Kent, Delta and Omicron COVID-19 variants in 2021, testing about 13.8 million people – more than a fifth of Great Britain’s population.

Due to demand and necessity, those working on the frontline in the test centres had been redeployed from other parts of the company, demonstrating their ability to adapt their skills to a test centre environment. This ability to adapt and apply themselves in new situations has been a significant learning experience.

‘Our frontline heroes have quite literally been heroes in some circumstances. Roland Wilkinson, who worked at the drive-through in Welwyn Garden City, saved a four-month-old baby who had a seizure at the site. She swiftly removed the child from a car to make sure he was breathing and conscious before the paramedics arrived.’