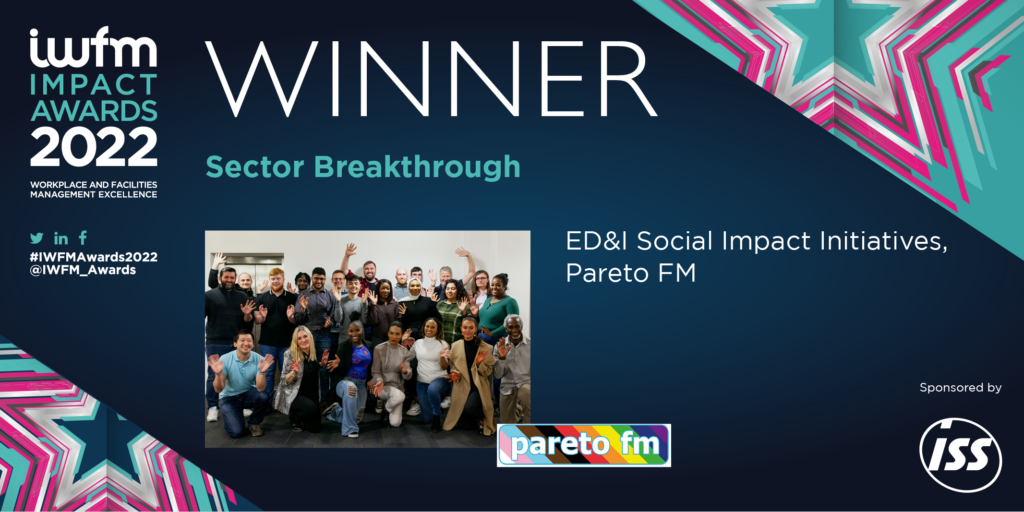 Outsourced service provider Pareto FM set up its #LoveWhatWeDo initiative with the aim of redefining how the FM sector is viewed and to break through what it sees as the barriers of ‘old school’ FM, in pursuit of a better and more inclusive way of doing things.

Since its 2014 launch, Pareto FM has sought to change the way the facilities management sector has been viewed externally through its take on service delivery, social value and making FM a career of choice. Today, the firm has a turnover of £30 million and employs more than 200 staff.

In 2021, Pareto set up an inclusion committee, chaired by Colin Kimber and tasked with leading and measuring the impact of its ongoing EDI and social value projects. Pareto’s board also decided to create the role of social impact director, with Emma Wilson appointed to that role.

One immediate effect of this was Pareto’s commitment to the Government’s Kickstart scheme, offering job roles across the business to 30 young unemployed people from a variety of diverse backgrounds. This initiative has won in the Social Value category at this year’s awards.

The #LoveWhatWeDo initiative is aimed at creating a central fund each year to be spent purely on social value projects. Pareto team members apply to receive money from the fund to run their own social value initiatives.

The programme is designed to be inclusive across all levels of the business, meaning anyone can request funding for an initiative. It’s worth noting that some of the more meaningful initiatives have come from the most junior members of Pareto’s teams.

Pareto believes it has created a social value driven environment not experienced in FM before. The #LoveWhatWeDo scheme has led to the delivery of more than 25 initiatives in areas ranging from LGBT+, BAME diversity, Women in FM, Young People in FM, Homelessness, Skydiving and charitable funding.

Examples of its activities include:

Pareto has as its goal that, by its tenth anniversary, it can evidence the delivery of £1,000,000 of social value during its lifetime.

The company also wanted to ensure that senior management did not set what they thought were the right causes and rather allowed teams to lead initiatives that felt valuable to them.

Particularly important was making it as easy as possible for teams to ask for funding for their own initiatives.

Accordingly, the typical project approval period is between just 24 and 72 hours. As a result, employees feel empowered. It has led to more employees feeling genuinely engaged and proud of the fact they work for an organisation like Pareto.

‘We wanted to embrace the more ‘controversial’ topics many companies were scared to talk about such as LGBT+ in FM, BAME, the lack of diversity within the FM sector particularly at board level.

‘The result has been a management staff retention rate in excess of 90% and a client retention rate of 98%. We believe these high figures are underpinned and driven by our socially valuable stance as we look to do good whilst we deliver our services.’