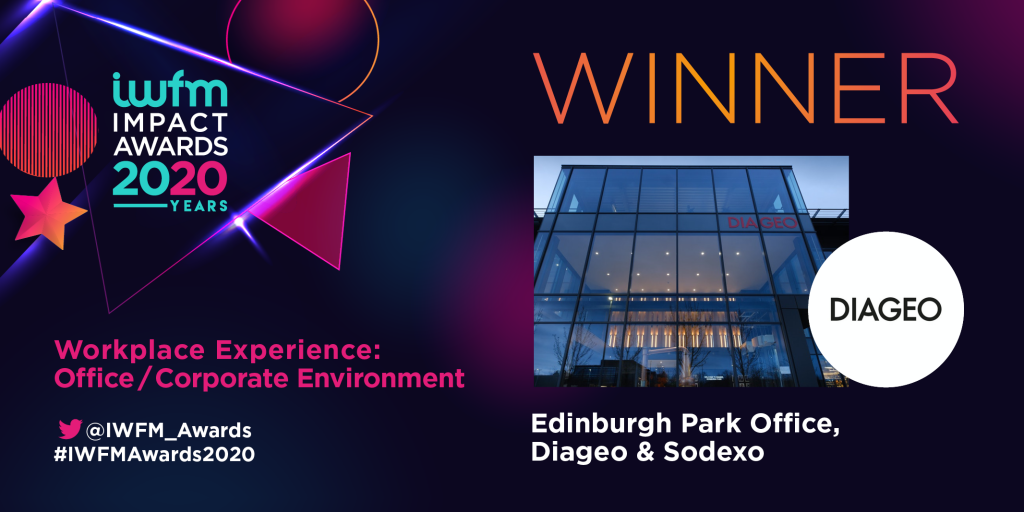 In November 2019, Diageo relocated 224 staff to a new Scotland headquarters in Edinburgh. In making this physical move, it also incorporated a new working environment designed to empower and inspire its occupants.

Diageo chose an open, collaborative environment which it says was driven by the need for staff autonomy in parallel with social elements to enhance employee wellbeing and productivity.

Diageo’s previous, desk-sharing ratio was 1:1, despite average workspace utilisation of only 60%, with only 20 meeting rooms available to staff.

Staff felt that there was an over-reliance on email and that they were siloed and disconnected from each other. They also felt that IT capacity was inconsistent and fraught with service interruptions; the office was too noisy and lacked space for people to take video calls; and there were variations of heat and air conditioning throughout the building.

Accordingly, the new space was designed to include 22 meeting rooms and 21 quiet rooms or phone booths for private, individual working purposes. The new workplace also included 30 open-plan collaborative spaces, and the ground floor restaurant and bar can be reconfigured for town hall-style events.

Supported by its FM provider Sodexo, which also consults on Diageo’s workplace experience strategy, other initiatives were introduced, such as a catering service designed for use throughout the working day rather than during a traditional lunch hour. The space and catering offering included space for staff to have informal meetings or to work while drinking coffee.

Diageo addressed IT issues by installing improved network and Wi-FI capabilities and invest in wireless keyboards and headsets for staff.

To complement the physical workspace, new working policies were introduced, such as a clear desk policy, supported by personal lockers throughout the building, limiting meeting room and phone booth usage to encourage movement, and a policy for taking phone and video calls in allocated private booths.